Out of this World

NASA announced that September 2017 to September 2018 is A Year of Education on Station for the International Space Station (ISS), featuring a variety of education-related events for students and teachers. Astronaut Richard (Ricky) Arnold, a volunteer board member for the Project WET Foundation, will be the educator on board the ISS for the latter half of this year—from March to September 2018. Given Project WET’s connection with Ricky, the Project WET Foundation seized the opportunity to enhance educational activities relating to water and the ISS’s Year of Education on Station. For more information about these educational offerings see descriptions below. 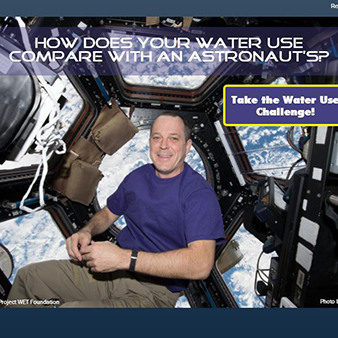 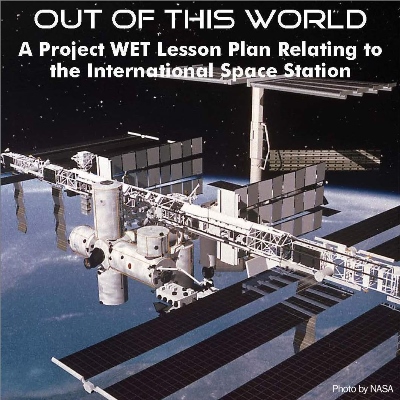 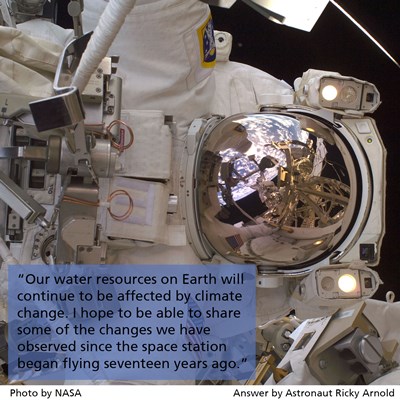 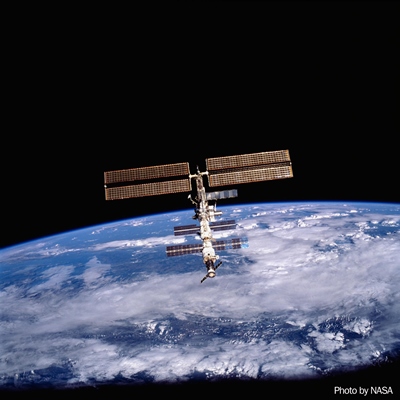 About the Water Use Challenge

To get you started on this journey with Ricky, Project WET designed The Water Use Challenge, a fun and interactive digital trivia challenge for ages eight and up. Do you know how much water you use in a day? How much water does Ricky use in space? The answers may surprise you—take the challenge and find out!

About the Out of this World Lesson Plan 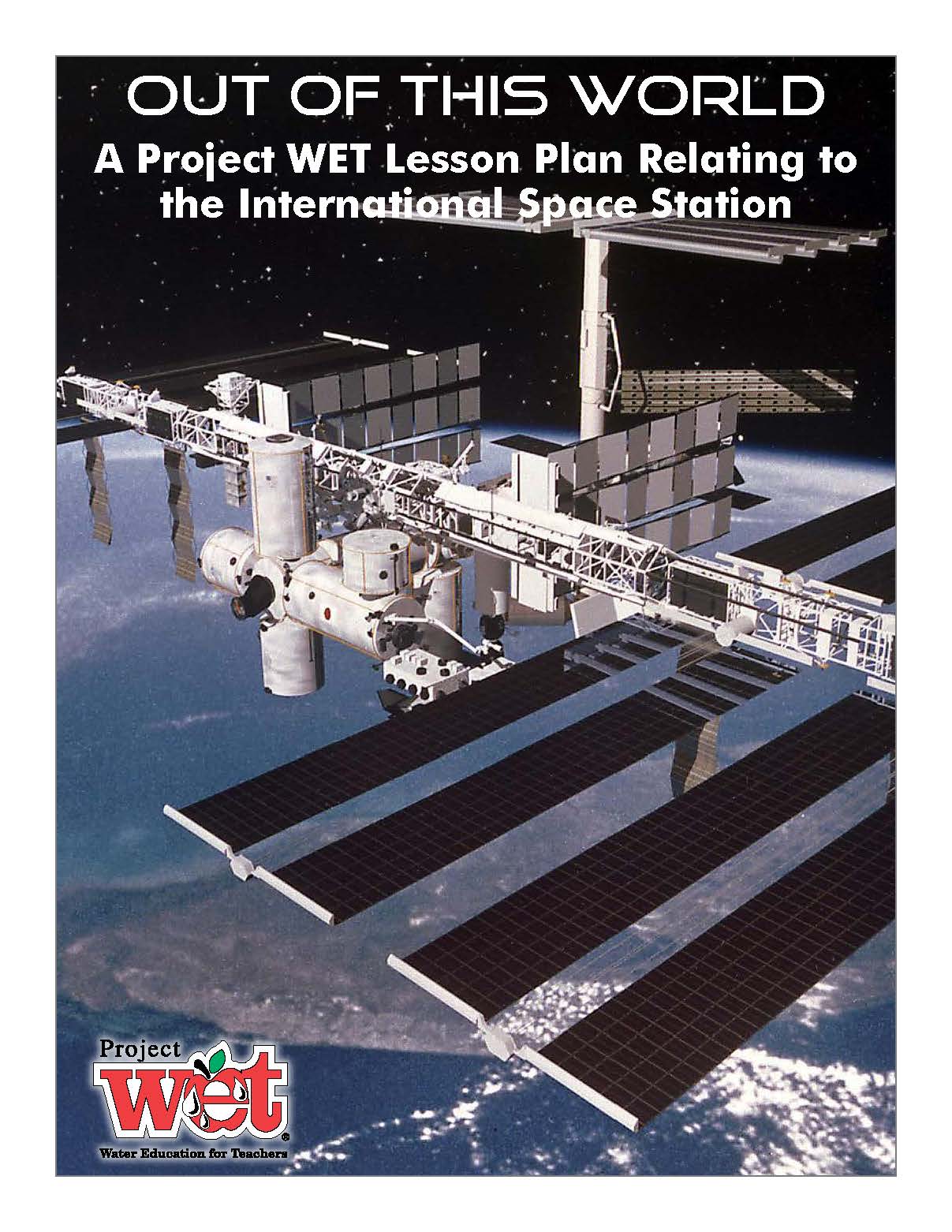 About the Lesson Plan

The Out of This World Lesson Plan is available as a free download on the Project WET store. It is a compilation of Project WET activities relevant to grades K-12 that can be used to teach about water and relate the lessons to the ISS. Each of these water-focused lessons offer a platform for learning about how this precious resource relates to and is seen from space.

Resources and Materials to be used with the Lesson Plan

#AstroFriday started as a series of questions submitted by Project WET educators and answered by Astronaut Ricky Arnold about water in space and on Earth and how being an astronaut has shaped his views of water. Now you can also find all other blog posts relating to Ricky and the International Space Station in this space.

As a tribute to the legacy of the first teacher in space, Christa McAuliffe, Astronaut Ricky Arnold and his colleague Joe Acaba completed her mission of sharing lessons from space while they were on ISS. The video demonstrations and science lessons are now available on the NASA website.

Why #Teachwater? Because Water Education Helps People Understand the Water Solutions of the Future

Out of This World Water Day event explores water on Earth from the vantage point of space, and how space exploration can inspire students to tackle STEM learning.

Astronaut Ricky Arnold—who serves as a volunteer member of the Project WET Foundation Board of Directors—is one of the three International Space Station crew members who landed safely in Kazakhstan today.

Watch the International Space Station pass overhead from several thousand worldwide locations. It is the third brightest object in the sky and easy to spot if you know when to look up. Visible to the naked eye, it looks like a fast-moving plane only much higher and traveling thousands of miles an hour faster!

In an Earth-to-space call with Astronaut Ricky Arnold, the Challenger Center and NASA this week announced the availability of the first of a planned series of video lessons based on curriculum developed by Christa McAuliffe.

#AstroFriday: Learning about Water Reuse on Earth from Astronauts in Space

Astronauts on board the International Space Station (ISS) can teach us a lot about water reuse. On ISS, astronauts like Ricky eat and drink many of the same foods we do, but their urine, humidity condensate and other system waters is then recycled in a specially built treatment unit.

This is the first in a series of posts that will highlight photos taken by Astronaut Ricky Arnold from the International Space Station (ISS). The photos are part of an ISS program that began in 1961, Crew Earth Observations (CEO). As NASA’s website explains, “Crew members on the International Space Station (ISS) photograph the Earth using digital handheld cameras from their unique point of view located 200 miles above the surface.

#AstroFriday: A Teacher Appreciation Week Message from the ISS

Educator-turned-astronaut Ricky Arnold is currently on the International Space Station, orbiting the Earth at 17,500 mph! This #TeacherOnBoard the ISS has a special #ThankATeacher message for all the educators out there!

Guest Post: Up Close and Personal with the Launch to the ISS

Celebrating an Out of this World Water Day

#AstroFriday: A Teacher in Space

The final #AstroFriday question highlights Ricky's perspective as a former classroom teacher embarking on the second half of NASA's Year of Education on Station.

Today's #AstroFriday question concerns how the technology and knowledge that astronauts use on the International Space Station could benefit people on Earth.

#AstroFriday: To Mars and Beyond?

This week's #AstroFriday question looks ahead to Mars and beyond!

#AstroFriday: Is the Earth Losing Water to Space?

This week's #AstroFriday question, submitted by Chuck Dugan of Arizona Project WET, asks if the Earth is losing water to space.

#AstroFriday: How Does Being In Space Impact How You See Water on Earth?

This week's #AstroFriday question is about how Ricky's time in space has affected his views about water on Earth.

#AstroFriday: How Is Water Used Differently in Space?

The #AstroFriday question for this week is about how astronauts use water in space.

#AstroFriday: How Has Water Changed Over Time?

Today's #AstroFriday question is about observing changes in water over time from the vantage point of space.

This March, Astronaut Ricky Arnold will return to space, this time for a six-month stint on the International Space Station. A former science teacher, Ricky will be taking part in NASA’s Year of Education on Station initiative, sharing his love of STEM and passion for teaching. 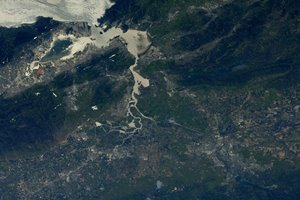 A series of blog posts will highlight certain photos that Ricky takes from the International Space Station (ISS). The photos are part of an ISS program that began in 1961, Crew Earth Observations (CEO). As NASA’s website explains, “Crew members on the International Space Station (ISS) photograph the Earth using digital handheld cameras from their unique point of view located 200 miles above the surface. Photographs record how the planet is changing over time, from human-caused changes like urban growth and reservoir construction, to natural dynamic events such as hurricanes, floods and volcanic eruptions.” Before Ricky’s launch to the ISS, we asked Project WET’s global network for nominations of places to be photographed. As the photographs are taken, these posts will highlight why the area was chosen, what water issues exist there and how educators can teach about these places.