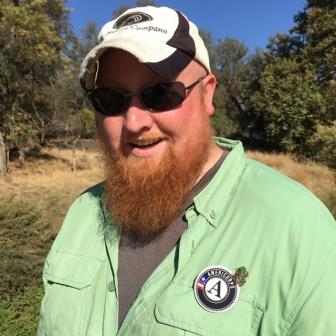 Outdoor Educator Ian Taylor "Learning outdoors has always been a part of my life," explains Ian Taylor. Taylor, currently the education and field trips coordinator for a land trust in California’s Tulare County via the Americorps national service program, has spent the last five years teaching people about the environment all over the United States.

"I was very active in scouting as a child and young adult, culminating in my becoming an Eagle Scout, and I went to Hocking College to earn degrees in both Eco-Tourism/Adventure Travel and Wildlife Resource Management," Ian says. However, even with all of this emphasis on environmental education, Ian says he had never heard of Project WET until he opened his first Project WET Guide in the fall of 2012.

"I had been charged with creating a nature program for kids to use as a learning tool at Camp Wyandot in southeast Ohio, he recalls. "I soon discovered in learning about Project WET activities that I had actually used many of them during camps I attended in my youth and during my time in school—I just hadn’t realized they were Project WET!" 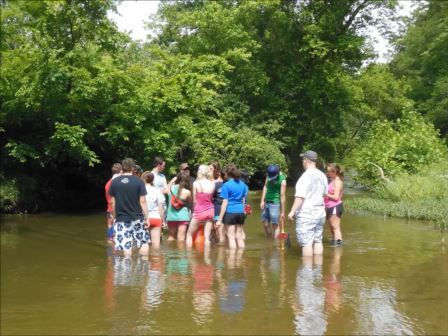 Ian has worked with thousands of students of all ages, like these in Ohio, in his career as an outdoor educator Since finishing his program in 2012, Ian has attended four Project WET trainings in three different states—Ohio, Indiana and California. The most recent training was at the Tulare County Office of Education (in California), and it was accompanied by a lecture on climate change and a panel of scientists to answer questions.

Ian says that these trainings have helped him in his career as an outdoor educator, during which he estimates he has reached several thousand people--adults, college students, grades K-12 and the community at large.

"I was the nature and outdoor living skills coordinator at Camp Wyandot in Rockbridge, Ohio," Ian relates. "I then served as a professional outdoor instructor at Bradford Woods in Martinsville, Indiana, which is the adjunct Outdoor Education Facility for Indiana University. I later became the environmental education specialist and oversaw the training staff. Many of the activities we trained our staff to use were from Project WET. Currently, I am wrapping up a term of service in AmeriCorps where I am serving Tulare County as the Education and Field Trips Coordinator for a land trust here in the valley." 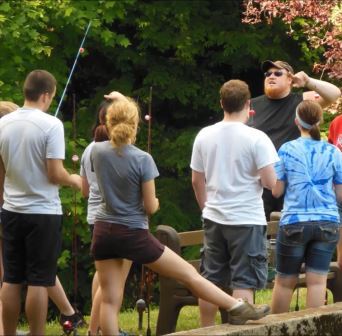 Ian working with camp counselors in Ohio on a fishing program Ian says that his favorite activity is Macroinvertebrate Mayhem, in which kids learn about water quality through the competition of macroinvertebrates.

"It’s not just a WONDERFUL way to teach about macros; it’s engaging, active and hilarious to watch," he says. "There are no 'winners' or 'losers'. Everyone learns and it provides an opportunity for adults to get involved. I pair this with a macroinvertebrate hunt and I have an entire lesson that covers several NGSS standards."

According to Ian, the reason teaching people about water is important is because water is life.

"It gives life, and it is strong enough to take it away," he notes. "Water is everywhere and essential to understanding the world and its ecosystems. Water brings people together or divides by causing wars, scarcity or physical barriers. When I was in Ohio, there was plenty of water, but much of it has been tainted with chemicals from acid mining. When I came to California, I settled in a place that had been in a six-year drought and has limited resources for storing water when it does rain. Thousands of miles apart and on opposite ends of a social and political spectrum but many problems revolve around the same issue of water scarcity."